For more stories about Chicago’s fascinating history, take a look at what Chicago city tours we’re currently running! L Stop Tours operates unique tours all across Chicago’s neighborhoods that are guided by lifelong Chicago residents. Discover the amazing architecture, tasty food, and interesting tidbits about the city in one of our Chicago walking tours!

For 106 years, the Chicago Union Stock Yards and adjacent meat packing plants were the most dominant businesses on Chicago’s South Side.

The Stock Yards complex was a veritable city unto itself — a 450-acre tract of land with 10,000 livestock pens with a capacity of tens of thousands of animals; hundreds of smoke-belching meat packing and rendering plants; a large post office dedicated primarily to Stock Yards workers; fully functional fire and police departments; an upscale hotel and world-renowned restaurant (the Stock Yard Inn); and a cavernous indoor stadium (the Chicago Amphitheatre), which hosted livestock shows, presidential nominating conventions and even the debut season of the Chicago Bulls (whose nickname was derived from the neighborhood’s most abundant commodity).

The Stock Yards District also was home to “Whiskey Row,” approximately 75 bars and taverns that were crammed into a one-mile stretch of South Ashland Ave.; more than 150 miles of railroad track that crisscrossed the neighborhood like steel mesh; and its own dedicated elevated transit line — the “Stock Yards Branch” — which featured stations that were named after meat industry names and businesses, such as Packers Ave., Exchange Ave., Swift and Armour.

While the Stock Yards withstood many challenges during its eleven-decade existence — several horrific fires, labor unrest, economic depressions, political pressure and ever-tightening food and safety regulations — the facility finally fell victim to a force it could not stop, the decentralization of the nation’s livestock and meat industries.  Chicago’s meat packers simply closed shop and moved west to be closer to the supply of livestock.  As a result, the Stock Yards no longer were needed as a marketing center.  On July 31, 1971, the huge facility closed its famous front gate for the last time — it was the end of an era for one of Chicago’s largest and most important industries.

Today, more than 50 years after its closing, there are very few remnants of the livestock or meat packing industries on Chicago’s South Side.  The entire complex (livestock pens, packing plants, railroad shipping facilities) has been bulldozed — replaced by a massive development called “Stockyards Industrial Park,” an assortment of warehouses and manufacturing plants that are engaged in virtually every type of business other than meat packing.  Nearby retailers no longer identify their shops with special neighborhood monikers (i.e. Stock Yards Hardware, the Yards Coffee Shop, etc.); and even that smell, that pungent, odoriferous, godawful smell that permeated every square inch of the South Side (and often the entire city), is gone.

Is anything left from Chicago’s glorious past as the livestock and meat packing capital of the world?  Yes, but you have to know where to find it.  That’s where we come in.

South Branch of the Chicago River near Ashland Ave. to W. 38th St.

This infamous one-mile stretch of waterway served as a dumping ground for waste materials from the city’s meat packers (blood, entrails, etc.) during the first 50 years of the Stocky Yards existence and was brought to everyone’s attention by Upton Sinclair in his novel, The Jungle.  The Creek’s name is derived from small gas bubbles that regularly burst on the surface of the Creek — a byproduct of the, uh, byproducts in the water for all these years.  Today, the waterway is much cleaner than it was in Sinclair’s day and the channel is suitable for boating or fishing.  On a hot day, if you take a close look at the surface of the water from one of the area’s bridges, you can still see bubbles rising to the surface. Built in 1925, this beautiful Colonial Revival-style building is a survivor.  A replica of Philadelphia’s Independence Hall, the bank outlasted the Great Depression, Chicago’s gangland wars of the Roaring ’20s and the horrific Stock Yards fire of 1934 (the bank opened for business the next day).  The interior of the building was not what you would expect for a bank that mostly did business with blue collar meat plant workers, cattlemen and neighborhood residents — it was opulent, with chandeliers, plenty of marble, classical moldings, raised panels and fluted pilasters.  The bank closed in 1965, six years before the Stock Yards would cease operation.  Although many efforts have been initiated to redevelop the building over the years, none have made it the finish line.  The building stands today on the northeast corner of Halsted and Exchange — empty and boarded up — waiting for someone to restore its former prominence. Erected in 1875, this limestone gate, designed by renowned local architect John Welborn Root, stands today as one of the few visual reminders of Chicago’s past dominance in the livestock and meat packing industries.  Designated a National Historic Landmark in 1981, the gate marked the eastern entrance to the vast 475-acre Stock Yards, the largest facility of its kind in the world.  Directly behind the gate is a memorial to Chicago Firefighters who died in the line of duty, especially those who perished in the Stock Yards Fire of 1934. The history of Chicago’s Stock Yards is interwoven with characters from the neighborhood who, like the Yards themselves, were long time survivors.  Stanley’s Tavern is the last saloon still operating on Whiskey Row, the infamous stretch of Ashland Ave. between Pershing Rd. and W. 47th St, which housed dozens upon dozens of bars for thirsty Stock Yards employees, meat packing workers and neighborhood residents.  Though Whiskey Row dates to the early days of the Stock Yards (1865), Stanley’s has an equally impressive history and has been serving loyal customers in the same location since 1935. Back of the Yards Neighborhood Council

Just southwest of the Stock Yards, Chicago’s Back of the Yards neighborhood has long served as a beacon of light for immigrant workers seeking opportunity —jobs in livestock and meat packing industries and affordable nearby housing.  Over the years the Back of the Yards neighborhood has been among the most ethnically diverse areas of the city — among the first arrivals were the Poles, Czechs and Lithuanians, then the Slovaks, African Americans and then Mexican Americans.  Formed after the Great Depression, the Back of the Yards Neighborhood Council is an organization whose mission is to “enhance the general welfare of all residents, organizations, businesses in our service areas.”  It accomplishes this with social service and economic development programs that support the community.  The Back of the Yards Neighborhood Council stands today as a reminder that neighborhoods and community organizations often outlive the businesses and industries that once were responsible for their birth and existence.

This ornate, Richardsonian Romanesque gray stone mansion was built in 1892 as a wedding gift to Helen Swift, the daughter of Gustavus F. Swift, the founder of Swift & Co. and also the inventor of the refrigerated rail car (for shipping meat carcasses long distances).  Interestingly, Helen Swift married Edward Morris, the son of another large Chicago meat packer, Nelson Morris.  The Morrises lived in the home until 1916 when they moved to another they built on nearby Drexel Ave.  After serving as a residence for other families, the mansion was a funeral home and most recently was occupied by the Urban League and the Inner City Youth and Adult Foundation. 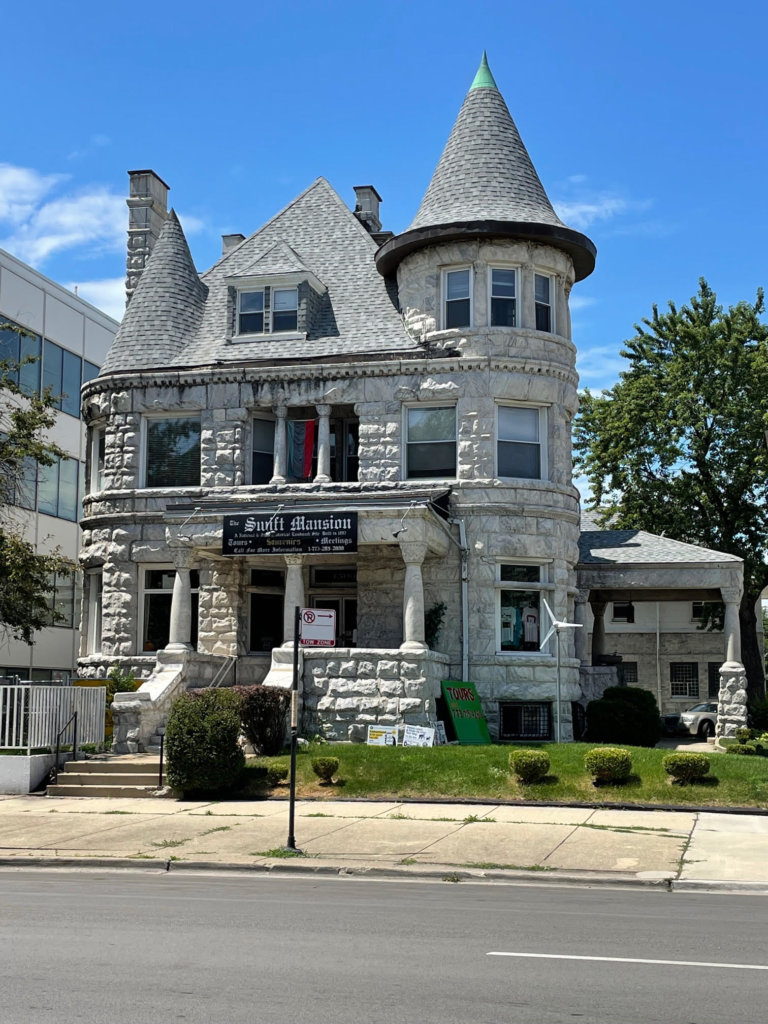 There is life after the Stock Yards, particularly in terms of the Stockyards Industrial Park, a collection of about 100 businesses (warehouses, manufacturing plants, offices) that have been built on the former Stock Yards property in the 50 years since the huge livestock facility closed.  The Industrial Park is clearly marked — huge metal, gate-like structures with “Stockyards Industrial Council” inscribed on circular medallions arch over neighborhood streets, marking the boundaries and major arterials running through the park.  Without these signs, it is virtually impossible to detect that the Stock Yards once stood here. The railroads played a leading role in the success of the Union Stock Yards over the years.  Livestock-hauling freight trains brought hundreds of millions of animals Chicago annually from all parts of the country and refrigerated railroad cars (invented by meat packer Gustavus Swift in 1875) enabled meat carcasses to be shipped as fresh product back to those very same parts of the country that the livestock came from, and farther.  Railroads were the transportation vehicle of choice until the 1950s when trucks made the process more efficient and economical.  Though many of the railroad tracks that snake through the district are abandoned, some, including this set of tracks on Morgan St. are still active and in use. Designed in 1883 by the prominent architectural firm of Burnham and Root, this lovely Queen Anne mansion was built for Sydney A. Kent, one of the founders of the Chicago Union Stock Yards and survives as one of the few remaining mansions on this former upscale stretch of South Michigan Ave.  Recently converted into several condominium apartments, the building was designated a Chicago landmark in 1987. In 1908, the South Side Elevated Railroad took over a little-used 2.8-mile railroad line running west from the Indiana Avenue Station (today’s Green Line) and extended it to the Stock Yards where it went around a big loop and headed back toward Indiana.  The Stock Yard Branch, as it was called, was popular with the 50,000 area workers as well as tourists who would take the L from downtown to visit the huge Stock Yards complex.  The Chicago Transit Authority, which assumed control of Chicago’s public transit system in 1947, discontinued operations on the line in 1957 due to declining ridership. This remnant of the elevated line (a “severed” overpass on State Street near West 40th Street) reveals where the former elevated line used to run. One of Chicago’s most prolific and popular meat companies, Vienna Beef, which got its start when its founders sold hot dogs at the 1893 Chicago World’s Fair, never had a manufacturing facility located anywhere near the Stock Yards or Packingtown…until 2013.  That’s when the Chicago-based company moved its manufacturing facility from its long-time North Side location to its present site on the northern edge of what is now Stockyards Industrial Park.  While other meat packing plants and food manufacturing facilities have long-since vacated the South Side and Stock Yards District, Vienna Beef stands today as one of the few actual meat companies that still operate within the former Stock Yards district — even though it is a relative newcomer to the neighborhood. Today, Packers Avenue is just another street sign that labels a non-descript roadway in an industrial park.  Over 100 years ago, the largest meatpackers in the world lined this street, which got its name from the businesses that operated here.  Another area street, Exchange Avenue (runs west at 4150 S. Halsted), is named after the Exchange Building of the Union Stock Yards, an office building where the paperwork for all live animal transactions was completed.

Back To All Posts
Previous Post Andersonville:  A Little Bit of Sweden Next Post 14 Outdoor Things to do in Chicago This Summer