Earlier this year, the new owners of the John Hancock Building announced that the 100-story building on North Michigan Avenue will no longer be called the “John Hancock Center.” For the time being, the building will simply be known by its address — 875 N. Michigan Ave.

Nevertheless, people will still call it the Hancock Building, just as they still say “Sears Tower,” even though the building was officially changed to Willis Tower in 2009. Old habits are hard to break. 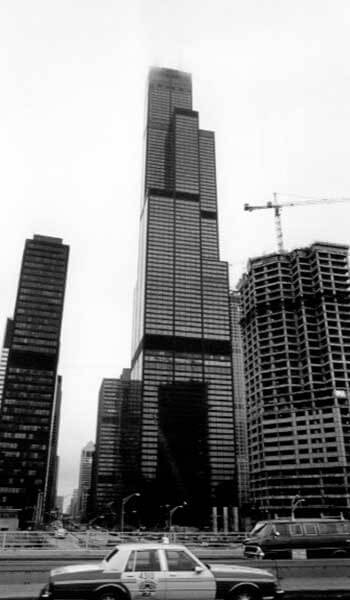 News of the name change for the Hancock Building got us thinking — what other iconic Chicago buildings have undergone name changes to the point that it’s difficult to remember its most current moniker?  Here are a few we came up with:

Crain Communications Building (150 N. Michigan Ave)— You’ve seen this building, it’s the one that looks like it was sliced off at the top into a diamond shape.  It was built in 1984 by Associates Commercial Group and was named Associates Center, until the firm moved out in 1989.  New building tenants renamed it the Smurfit-Stone Building and, later, the Stone Container Building, until 2012. That’s when Crain Communications (publishers of Crain’s Chicago Business, Advertising Age, Auto Week) relocated their Chicago headquarters into the building. Guaranteed Rate Field (35th and Shields) — We’ve only had to live with this horrible moniker for a baseball stadium for two years (so far), but prior to that it possessed an equally horrible moniker, U. S. Cellular Field (nicknamed “The Cell” by fans). That name lasted from 2003 until 2016. In the era before “naming rights” were sold to the highest bidder, the stadiums located at this intersection (the original was across the street from the current one) were known, alternatively, as Comiskey Park (1912-1962 and 1975-2003) and White Sox Park (1910-1912 and 1962-1975). Richard B. Ogilvie Transportation Center (500 W. Madison) — The original structure on this site was built by the Chicago & North Western Railway in 1911 and was called the Chicago & Northwestern Terminal until the station’s head house was demolished in 1997 and replaced by a 42-story office building called Citicorp Center.  Later that same year, the building, which rises above the below-street-level tracks, was renamed after Richard B. Ogilvie, a former Board member of the Milwaukee Road Railroad, a governor of Illinois and the creator of the Regional Transportation Authority. Palmolive Building (919 N. Michigan Ave.) — This beautiful Art Deco building, the one with the beacon on top, was built in 1929 by the Colgate-Palmolive-Peet Company and, for the next 36 years was known as the Palmolive Building. In 1965, Playboy Enterprises moved its editorial and business offices into the building and it became the Playboy Building, as evidenced by the huge PLAYBOY letters across the outside of the top floor. Playboy vacated the building in 1989 and for the next 12 years it was known by its street address, 919 N. Michigan Ave. In 2001, the new owners of the building decided to restore the Palmolive name, which remains in place today. 680 N. Lakeshore Drive (680 N. Lake Shore Drive) — From 1926 until 1984, this full-square-block building was known as the American Furniture Mart and it had a different address — 666 N. Lake Shore Drive. After the Mart went through some difficult financial times, Chemical Bank of New York purchased the building and immediately decided to change the building’s address. The bank said it was to distance the building from its troubled financial past; others claimed the number 666 was “cursed” and was a veiled reference to the number of the Beast from the book of Revelation. In the early 1990s, the building was converted into condominiums and has been identified by its new street address ever since.

Book one of our L Stop Tours to see these iconic Chicago buildings up close and personal. Back To All Posts
Previous Post Where to Find Chicago Christmas Classics Next Post Who was Harold Washington?