If you Google “weird Chicago laws,” you’ll get a number of hits that list blue laws that were enacted in another era — laws that were designed to restrict certain activities on Sundays for religious reasons, such as gambling or the sale or consumption of alcohol.

Some of the weird Chicago laws that are still on the books border on the bizarre: it is illegal for a Chicagoan to dine in a restaurant that is on fire; it’s illegal for dogs to drink whiskey; it’s illegal for your pet to have poor hygiene; you might be picked up as a vagrant if you have less than $1 on you.

While strange laws aren’t unique to Chicago — many U.S. cities still have them on the books — our Town has always taken a certain amount of pride in doing things differently than other U.S. cities. From innovative legislation to bold new ideas, Chicago has always done things its own way — right or wrong.

Can’t Buy a Car on a Sunday

In 1984, at the behest of the Chicago Automobile Trade Association, the Illinois legislature passed a weird Chicago law that forbade auto dealers in the state from opening for business on Sundays.  Why? The dealers say they wanted a day for their employees to be with families and not have to worry about stolen sales from other dealers that decided to stay open on that day. The ban on car sales on Sundays is still in effect throughout Illinois.  Because many other retailers are now open seven days a week, one can only wonder why auto dealers need to be singularly protected.

The Movies You Watched Were Censored

From 1907-1984, every movie that played in a Chicago movie theatre had to receive an “OK” from the Chicago Film Review Board.  The Film Review Board was operated by the Chicago Police Department and its board members generally consisted of widows and orphans of Chicago police officers.  Sometimes the Board recommended edits to films, sometimes films were banned entirely, like the original version of “Scarface.” It opened in theaters nationwide in early 1932 but didn’t play in a Chicago theatre until late in 1942.  It seems the film Board didn’t like the way Chicago was portrayed. The Board was disbanded in 1984 because it had become irrelevant in the face of rigorous film industry self-regulation (a rating system). Except for gambling towns like Las Vegas and Atlantic City where casinos serve alcohol 24 hours a day, Chicago has the latest Saturday night closing time for a tavern — 5 a.m. — than any other city in the nation.  (Many cities match Chicago’s 4 a.m. closing time during the week, however.) Approximately 150 taverns in Chicago have 4 a.m./5 a.m. liquor licenses, a number that has held steady for the past few decades.

No Meat After 6 p.m. or on Weekends

Between 1952 and 1977, the sale of meat was banned at supermarkets throughout the Chicago metropolitan area after 6 p.m. on weekdays and all day on Saturdays and Sundays.  To ensure that customers didn’t try to purchase product, retailers threw a tarp over the meat case; customers who wanted to enjoy a barbecue over the weekend had to remember to “stock up” during the week or go without.  Why the weird Chicago law? The local Meat Cutters union wielded enormous power over the local retailers with their labor contracts — and the Meat Cutters didn’t want their butchers working late hours or on weekends when they could (in theory) be home with their families.  Eventually, the ban was lifted when the union realized that its members’ jobs were in jeopardy if the store couldn’t sell meat products during the store’s business hours. 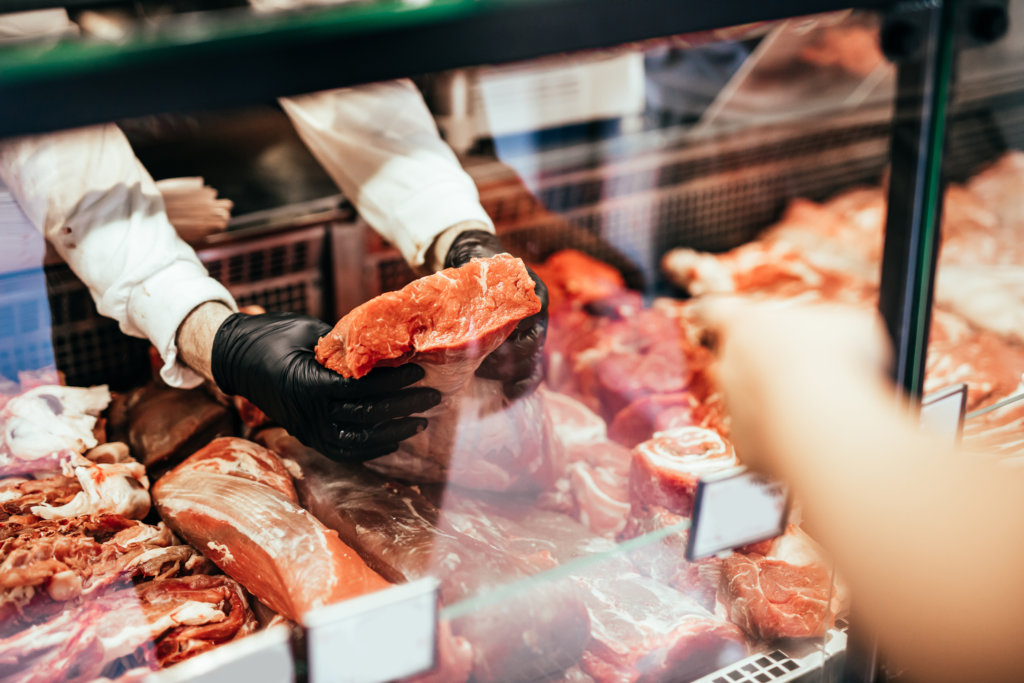 The City of Chicago has long had a love/hate relationship with street food vendors — both of the Daley mayoral administrations (1955-1976 and 1989-2011) made it difficult for operators of food carts to peddle their wares on street corners or at public events.  When food trucks became all the rage in New York and Los Angeles in 2010, Chicago again took a cautious approach toward licensing them. Initially, the city didn’t allow any food preparation on board the trucks, only products that had been prepared and packed in a commercial kitchen were allowed.  Two years later, the city relented on the preparation rule but then issued an edict that no truck could locate within 200 feet of an existing brick and mortar restaurant and when they did park it was for a limited time. Why? The city wanted to protect the turf of existing restaurants, not wanting upstart food trucks to steal their business.  Today there has been an accommodation of sorts — the city limits the number of food truck licenses but lets them park in pre-established zones throughout the city.

The Evils of Foie Gras

In April, 2006, the Chicago City Council barred restaurants from serving foie gras — fatty duck or goose liver — because the animals were mistreated and abused while they were being raised.  The City became a laughing stock worldwide and a displeased Mayor Richard M. Daley called it ‘the silliest law they’ve (the Council) ever passed.” Thanks to intense lobbying by the restaurant industry, the ban was overturned two years later and customers were once again allowed to consume the gastronomic delight.  Interestingly, New York City recently approved legislation that will ban foie gras in restaurants beginning in 2022. Who’s the laughing stock now?

Before automobiles, the city had a number of ordinances prohibiting certain activities near the lakefront.  One of them banned commercial vehicles (anything that carried freight) from using streets adjacent to the lake, such as Lake Shore Drive.  In 2020, the ban on trucks is still in effect for Lake Shore Drive and, yes, that includes pick-up trucks — even those that are not carrying freight or those that are not even considered to be commercial.  Although this weird Chicago law isn’t closely monitored, Chicago Police still issue citations whenever they see pickups headed down the Drive and unknowing drivers are shocked to learn that they have broken a weird Chicago law that no one knows exists. If you want to learn some more interesting facts and stories about Chicago, consider taking a Chicago city tour with L Stop Tours!